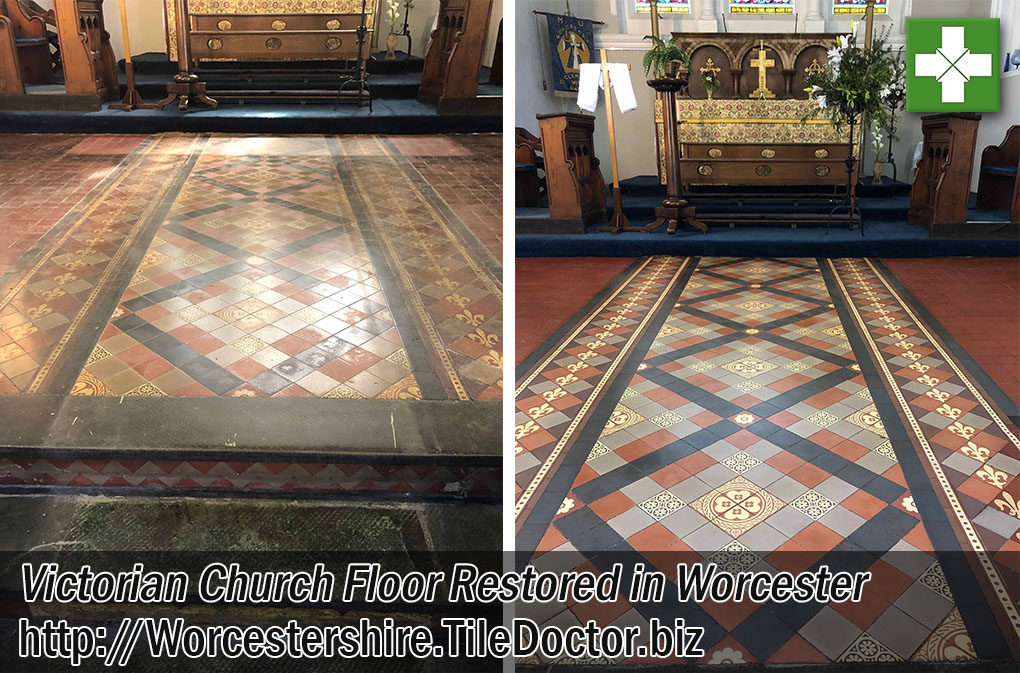 Earlier this year I was contacted by the church warden of St Clements Church in Worcester regarding the renovation of its Victorian floor tiles. The Church was built 200 years ago and is one of the oldest churches in the city. Unfortunately, being situated close to the West bank of the River Severn it is at risk of flooding and a recent flood had ruined a large section of carpeting which had to be removed. In fact, according to the local newspaper Worcester has been named as sixth worst place in the UK for flooding. 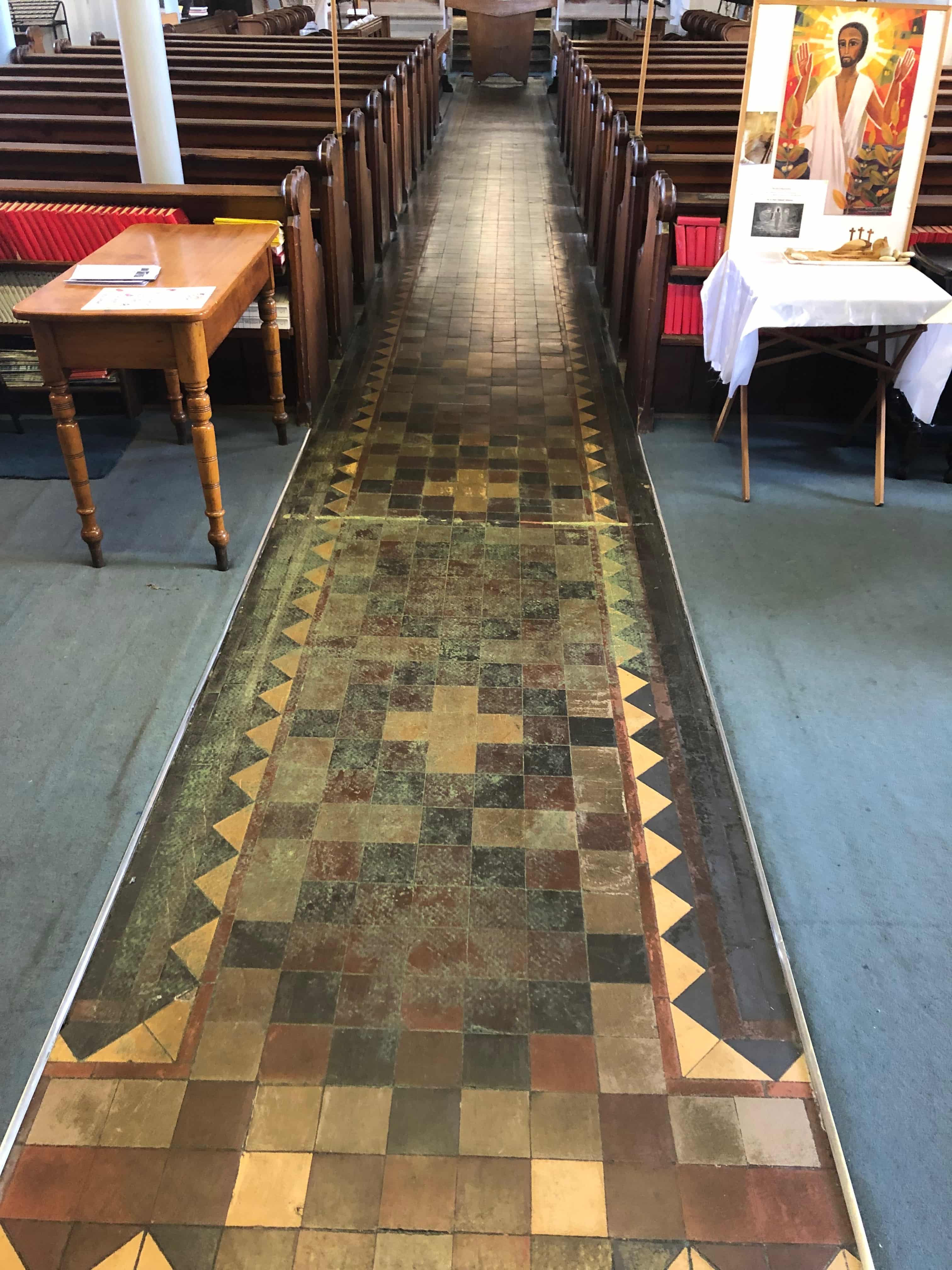 Every cloud has a silver lining, so they say and, in this case, once the carpet was removed it revealed a very impressive Victorian tiled floor. There were two sections of 24m2 & 10m2, and I visited the Church to survey the floor and assess its condition.

Victorian tiles are generally very robust, and I discovered that the carpet had helped to preserve them in good physical condition. I conducted a few cleaning tests and I could see there were two areas where there was quite a lot of wax, dirt and carpet adhesive that would need removing. I discussed with the warden the process and provided a detailed quote. 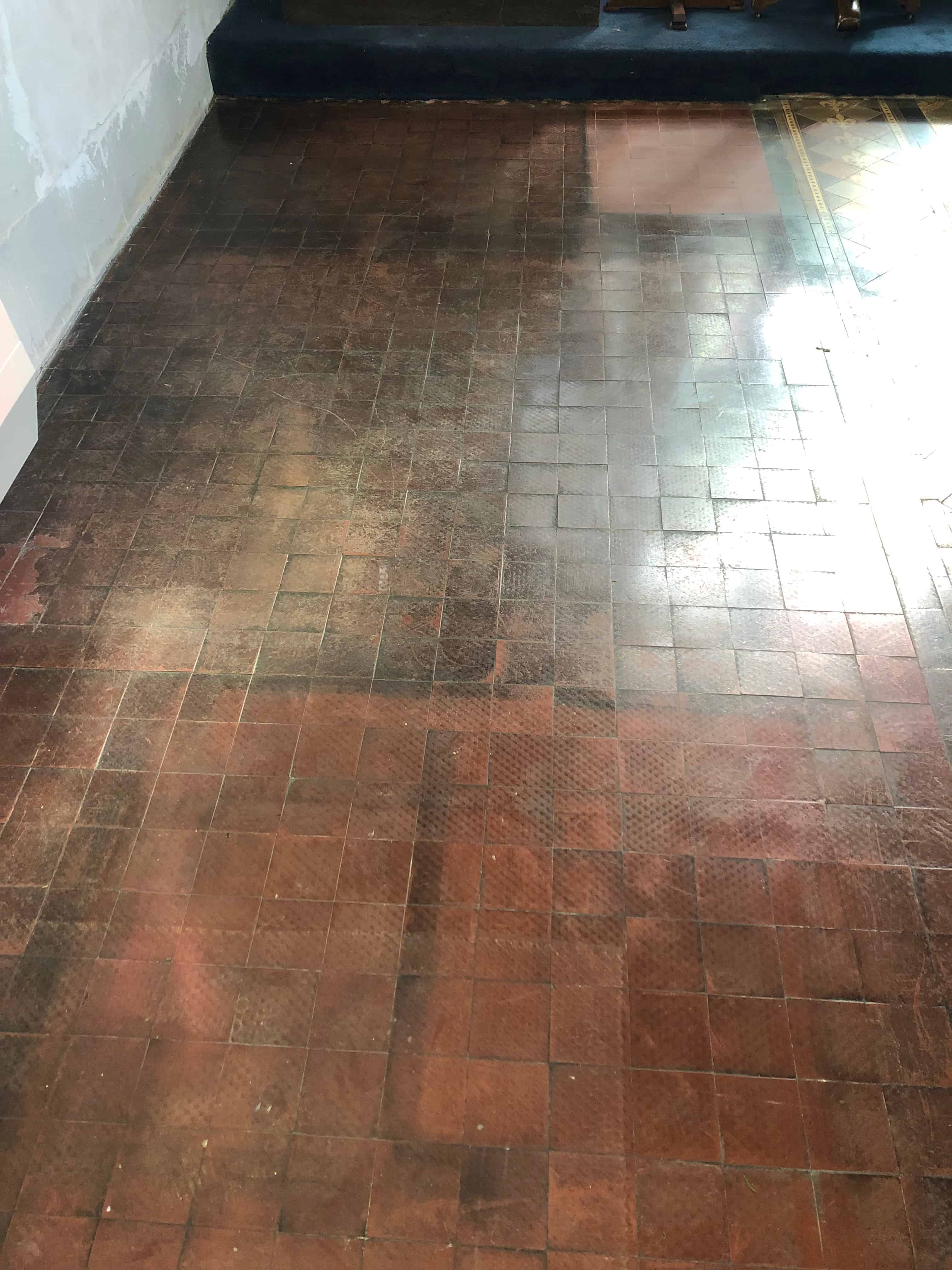 My quote was accepted, and a date agreed to commence the work when their diary was a little quieter as the area would be out of use for a few days.

On the first day I decided my first task would be to tackle the years of wax build-up and glue around the Altar. To do this I sprayed the floor with a strong dilution of Tile Doctor Remove and Go which is a powerful coatings remover designed for use on Tile and Stone. The tiles were then covered in industrial cling film, this prevents the solution drying out and increases the active dwell time on the tiles so it can really get to work breaking down the wax and adhesive.

Working in sections I repeated the process across the whole floor and after an hour I removed the cling film and then scrubbed the floor with a rotary machine fitted with a 200-grit diamond pad. This really got deep into the tiles and after repeating the process several times the soiled cleaning solution containing the wax and glue was rinsed off the tiles and extracted with a wet vacuum.

I then used handheld burnishing blocks and a scraper on the stubborn and hard to reach places that couldn’t be accessed by the rotary machine. It was a large area that needed to be treated in this way, so the cleaning process took three days before I was satisfied with the result.

I used a lot of water in the cleaning process, so I left the floor to dry out for a few days, returning the following week to apply a sealer to the tiles.

I sealed the Victorian tiles with Tile Doctor Seal and Go Extra which is which is breathable thereby allowing for moisture to rise through the tiles and evaporate. This is an important consideration for old tiled floors where a damp-proof membrane hasn’t been installed. Without this moisture can build up in the floor where it could eventually spread out to the walls resulting in rising damp. The tiles took five coats of sealer and each coat had to be left to dry before applying the next so naturally this took some time and had to be done in sections cordoned off from the parishioners. Once the sealer had been applied to the whole floor the transformation of the church floor was complete, the floor looked fantastic and much more in-keeping with the period look of the building. 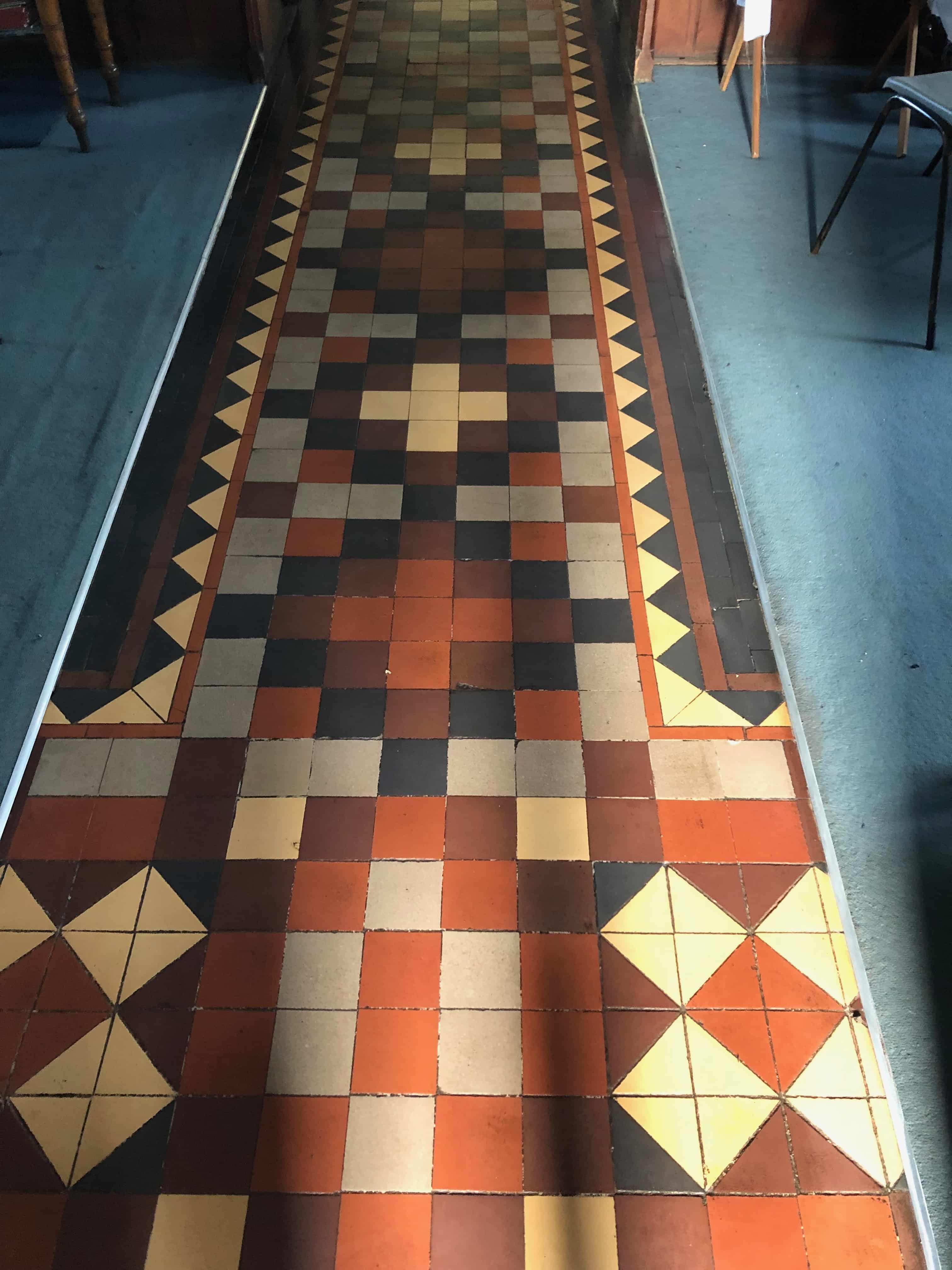 I received a glowing review from the Church which I have copied below. I also heard that a parishioner had seen the floor and had cried because the last time she had seen the floor was 50 years ago at her wedding, its moments like those that make my job very worthwhile!

Mark Conway was an absolute star. He worked so hard on our Church floor. It looks magnificent now and everyone has commented on how beautiful it looks. Mark was such a nice friendly and helpful person and went the extra mile. Thanks Mark. A brilliant job. 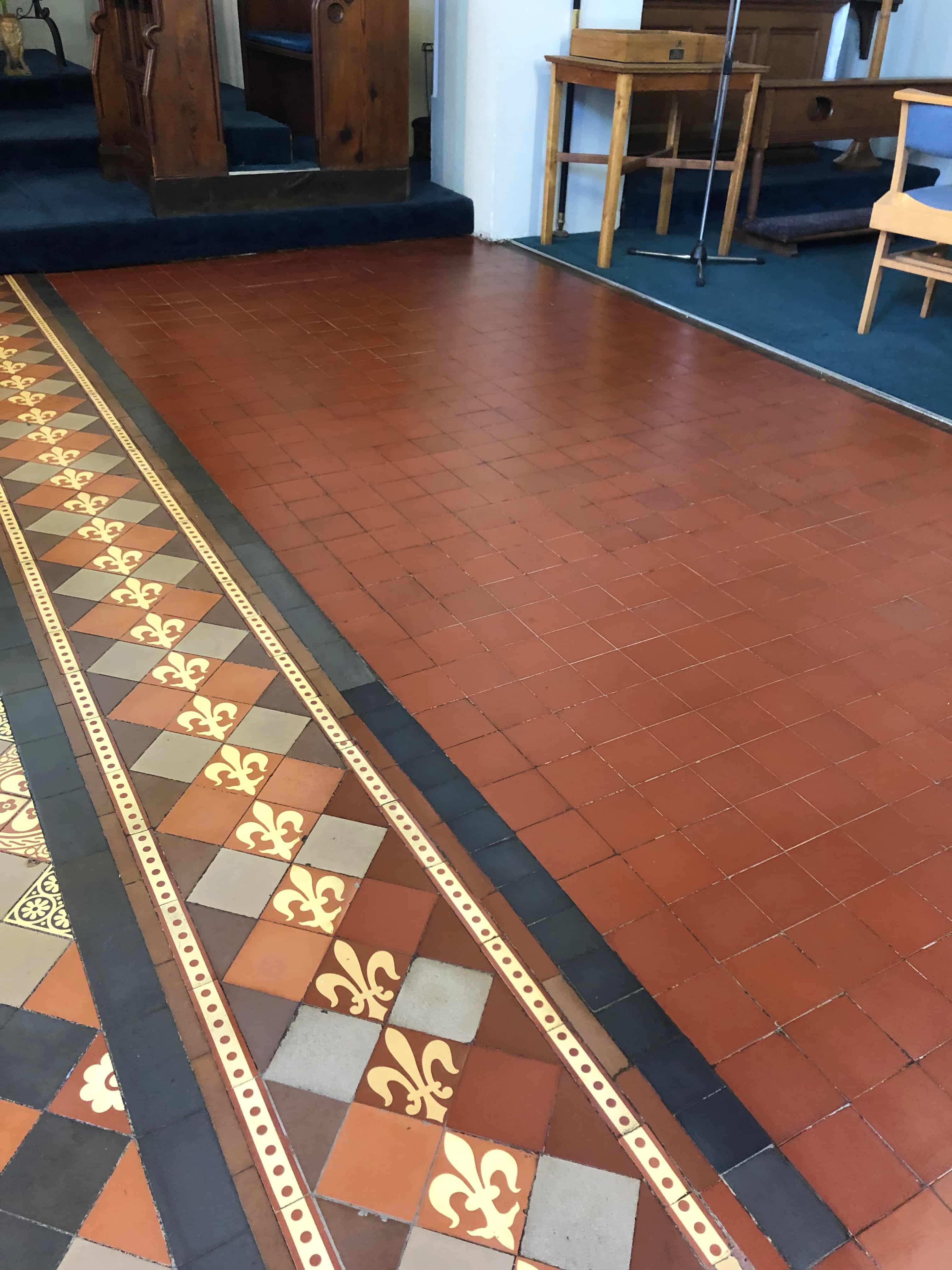