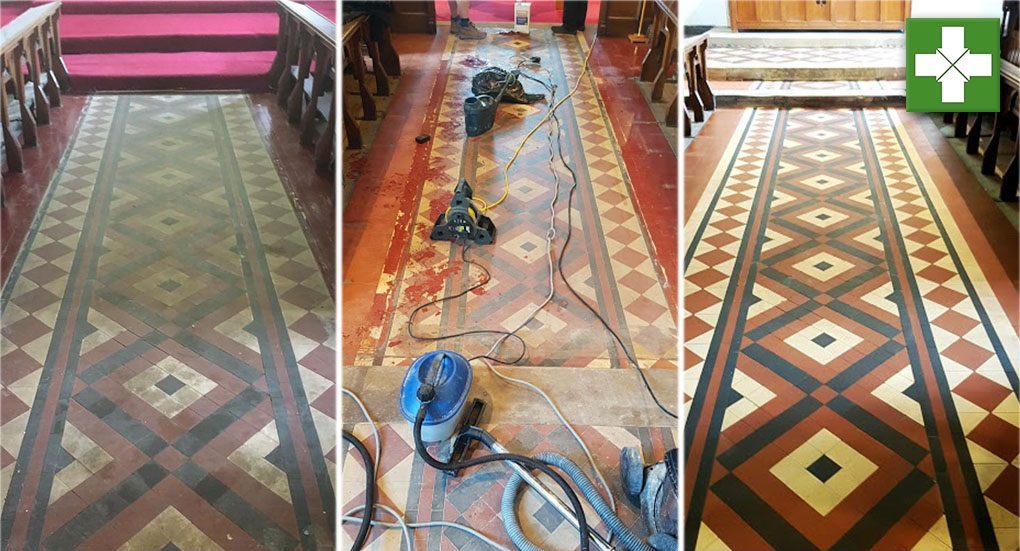 Earlier this year I was asked to restore a number of Victorian tiled floors at the St. Peter & St. Paul’s Parish Church in Rishton near Blackburn. The Church has a lot of carpet flooring and some had to be removed due to some other work that was going on and these tiles were discovered underneath. The Vicar believe the tiles are originals and date back to 1877. 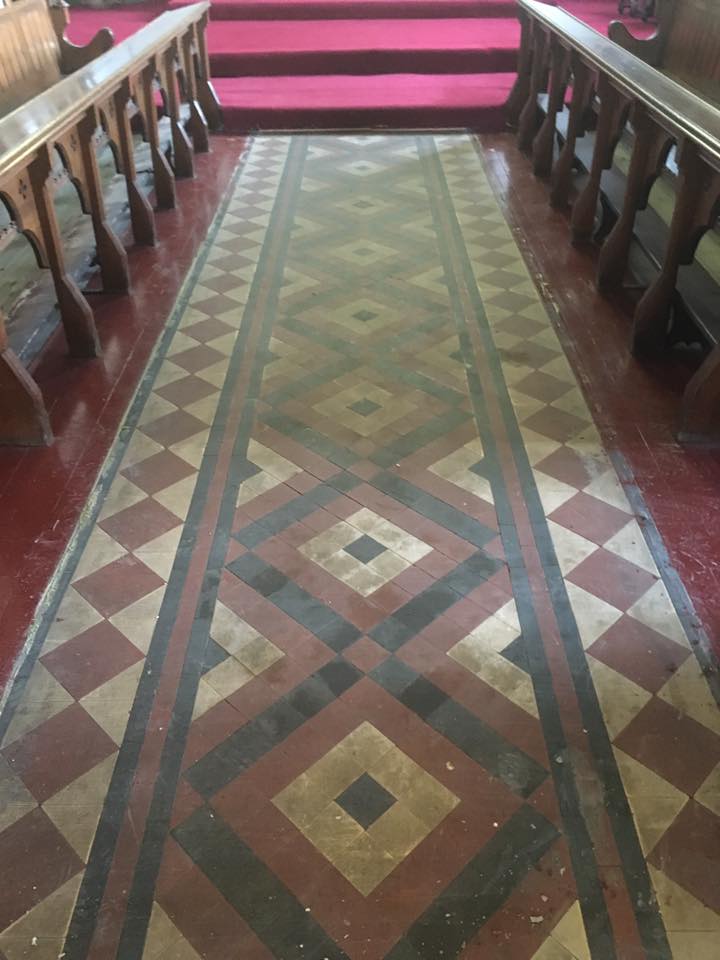 You can see from the photograph above that the tiles were discoloured with years upon years of ingrained dirt but what you can’t see is the adhesive that was used to secure the carpet to the tile. The whole floor and the Altar behind would need several deep cleans to remove the dirt and glue and being a busy church with an active congregation I it would need to be done in a few days. In need of an extra pair of hands I gave Derbyshire Tile Doctor Henri Mall a call and he was more than happy to help me out.

To begin, I took moisture readings over all areas due to be worked on; Damp Proof Membranes were not invented until relatively recently, so it pays to know in advance how damp the floor is. Next, I gave the floor a quick clean in Tile Doctor Pro-Clean, mainly to remove any surface dirt and grit. This was then followed by the application of a 200 grit burnishing pad to grind off surface dirt and excess glue so we access the pores of the tile. The resultant soil was then rinsed off with water and then extracted using a wet vacuum.

The next step was to give the tiles a good soak in a solution of NanoTech HBU remover (HBU stands for Heavy Build-Up) which was then scrubbed in using a black pad fitted to a rotary floor machine. This process worked well to release the ingrained dirt from the tile and took off a lot of the glue however it took quite a few iterations and the use of a portable steamer to really get the floor clean.

There was a lot of tile to do so working in sections it took Henri and I two days to really get the floor clean. A lot of water was used in the process and although a lot of the moisture was extracted using a wet vacuum we felt it best to leave the floor to thoroughly dry out for a couple of days.

The floor needed to be dry before sealing so on our return I checked the floor with the damp meter and compared it with my previous readings. All was so Henri and I started applying the first coat of Tile Doctor Colour Grow, an impregnating and breathable sealer ideal for this situation. Colour Grow seeps into the pores of the tile protecting it from within and enhancing the colours in the tile. Three coats were needed so it took most of the day to complete.

While it was a lot of work we were very both pleased with the outcome, as was the Vicar who left the following comment on the Tile Doctor feedback system.

Many thanks to Tony Olmet, not only a very good job but he worked tirelessly, never stopped, to get it done. Nothing a problem, very helpful chap. Recommended.
Christopher Holden (vicar), Rishton 14 July 2017 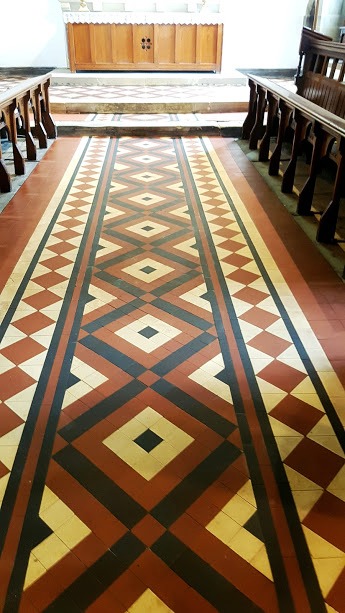